“An affair can overlap, of course” Helen Gurley Brown, Sex and the Single Girl

HGB is all about dating married men, so today, I asked my friend Eeon, (married to the awesome Bridget) to accompany me to see G.I. Joe: Retaliation.  And since Eeon does the Canned Laser podcast with Pete (one of my Most Eligible Bachelors) I decided to invite him along too . . . after all, since HGB says I can date two men at once, why not go out with them at the same time?  I’m a busy girl, after all.  Also, this way, I shielded Ian from having to sit through a movie that was almost as good as The Room.

Some quick thoughts about the movie: Walton Goggins was extra-Goggins-y, just eating scenery and loving it.  He rocked a pink oxford (Note to guys: You cannot do this.  Do not even try) and his scenes were over too soon in a really drag way.  It wasn’t as clever as his performance in Predators or as deep as his portrayal of Shane Vendrell in The Shield.  But it was amusing for a few minutes in an otherwise torturous movie devoid of soul, heart, or original dialogue.

But the company was great.  We had pizza and wings afterwards at the Depot, and they made me laugh, like they always do.

Guys, here’s the secret to getting a great girl (like Bridget).  Be funny.  And not funny in that way that you can quote Anchorman.  Be genuinely funny.  Learn to tell a joke or a good story.  That way , no matter what, you can always show a girl (even ones you’re not dating) a good time.

Spoiler Alert: It’s not going to be that good.

And later, I’ll post of my awesome adventures in Swing Dancing and Making Men Beg.  HGB (and TLC) would be proud.

“I can’t give you anything but love” is a real Depression-era sentiment.  There must be something he can give.”  Helen Gurley Brown, Sex and the Single Girl

I was in Sperbeck’s getting chips, a banana and a few minute chocolate bars (feck diets!) when a man came up to me and told me he liked my rose-printed 14 eyelet Doc Martens.  They’re beautiful boots; my mom and Ian went in on them for Christmas one year and I’ve been wearing them a lot lately. Docs are my shoe of choice; I’ve been wearing them since college and this is the 4th pair I own.

But they’re not exactly Betsey Johnson stiletto booties, so I was kind of surprised that they got noticed.  He proceeded to tell me that he had a pair of vintage hiking boots that would probably be my size; if he could find them, he would give them to me.  I smiled politely and thanked him, but didn’t expect anything would come of it.

I went in today to get my chips and chocolate, and the woman behind the counter said that he had, in fact, left them for me.  And, true to his word, they fit.

Some women get men to buy them anything.  My sister Laura used to have guys lining up to buy her things.  One of them offered to buy her a dog one time.  My boyfriend Geza used to spoil me with roses and dinners, Ian buys me random things and Matthew almost never shows up empty handed (he got me an SVU crew hoodie!) is but as a general rule, men don’t often come up and offer to give me presents. The boots are stiff from storage, but they’re insanely cool.  They’re actually cobbled, not glued.  And maybe they’re not affair-inspiring stilettos, but they’re totally Libby.

The windmill worked wonders for my waist, but that’s about all I can say.  Maybe if I kept doing them longer, I might see some more serious results, but seeing as how I pulled my back and tortured my neck doing them, the first time,. I think I’ll try something else.

To be honest, I’m really not a fan of workouts.  I had one I followed for a little while, but when we moved, I fell out of practice.  Ian goes to the gym, but I’m just waiting out spring so that I can get back on my bike.    I like my exercise to have a purpose, like going to the store to buy chips.  I like to get somewhere.  I like to see scenery and I like to go at my own pace. And when I’m on my bike, I can daydream, I can sort through the day’s worries, plot new story ideas or just breathe deep and not think at all.  When I do a workout routine, I’m just watching TV, which is something I do too much of anyway.

So maybe biking isn’t not ladylike, but it sure as hell beats laying on the floor writhing around like I’m possessed by Satan.

In the pursuit of fab fitness, your glamorous geek pulled a muscle in her neck and is now existing on  a steady diet of ibuprofin, muscle relaxants and bad cop shows.

But in the bonus column, my waist looks FABULOUS . . . even if the windmills did pull out my back.

My full report will be on your desks tomorrow.  For now, HEATING PAD!

“To Slim Inner Thighs: Stand on tiptoe with feet together and, without moving forth from that spot, “prance” in position.  The brisk, back and forth motion will slap the inner thighs and knees together, reducing excess fat.  Continue running in place for one minute.” Arlene Dahl, Always Ask A Man

There’s something instinctively Flashdance about this motion, but yeah, I’m pretty sure that’s not how exercise works.  But then again, maybe I’m not “prancing” correctly.  I’m sort of not sure how this one works, to tell you the truth.

Had to skip the windmills tonight.  I think I pulled my back . . . badly.  Beauty hurts.  (Whoopie Pies, on the other hand, do not!)

“To slim upper hips: Lie flat with arms extended at shoulder level.  Bend your knees (to your chest) and roll from side to side, keeping shoulders flat as you roll.  Roll five times to each side.  Work up to 20.”  Arlene Dahl, Always Ask a Man 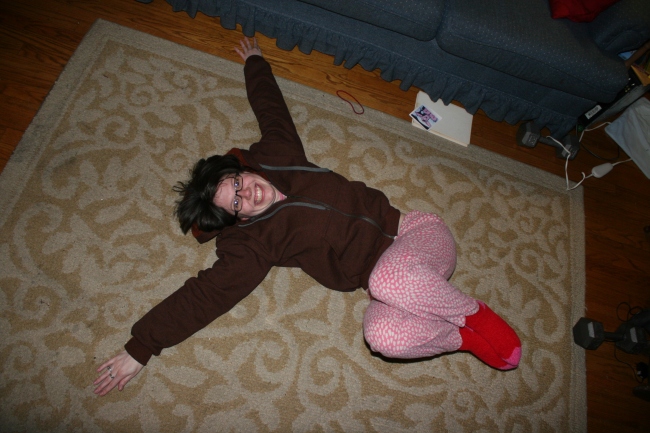 My legs still hurt from the first set of windmills.  This one actually hurt my neck a bit, which I have to watch out for because I did serious damage to my neck/left shoulder in a fall three years ago which has, at times, made it difficult to keep up a workout routine.  I can usually keep it going for a bit, then I hurt myself and fall out of practice . . . but this one is low key enough (and has enough options) to keep it fresh.

My friend Matthew just texted me that he’s watching The Fly and, according to him, I do act and look an awful lot like Geena Davis.  I don’t know how true that is, but seeing as how Geena Davis is my favorite actress ever and the inspiration for my life, it’s pretty much the best compliment I can ever get (especially coming from a guy who looks like Jeff Goldblum)

“To eliminate round shoulders, dowagers hump . . .lie flat, arms at sides.  Without assistance from your elbows, arch you back as it f being pulled skyward by a string attached to your breastbone.  At the same time, slide your head back until the top of it touches the floor.” Arlene Dahl Always Ask a Man.

I’m going to start out by saying that I hurt.  My back, my sides, the whole thing.  Yesterday’s exercise works.

I do slump at my desk.  I kind of can’t help it.  I try to sit up, but inevitably, I’ll end up slouched and stressed out.  I did a similar move with my yoga DVD, only the frizzy haired instructor who was probably named Denise explained it as “shine the light of your heart out into the universe.”

Today sucked, and it sucked for the entirety of it, and I’m just coming down from the sheer suckiness of it.  Being able to work out in front of Justified helps.  So I tried 10 reps of one, and I did another 15 of the windmills even though I could barely touch my toes.  I didn’t feel the light of my heart shining out into the universe, but oh well.