Tonight I’m embarking on one of my absolute favorite dates with two of my absolute favorite people–that is, my boyfriend Ian and my friend Eeon of CannedLaser are joining me to see the rebroadcast of Best of Rifftrax Live: Plan 9 From Outer Space.  Quick word about Eeon–he’s the funniest person I know, only because I don’t know Mike Nelson of Mystery Science Theater 3000/Rifftrax in real life, even if he does occasionally reply to my Tweets, which makes my heart flutter, because I am a nerd.

Eeon and I have known each other since college and are absolute proof that men and women can just be friends.  We’re pals.  His wife is wonderful.  He let me give the speech from Independence Day at his wedding and let me guest podcast with him and his co-host, Pete, who is also hysterical.

But tonight is also the end of 30 Rock, which, along with MST3K and The Shield, can be credited with fundamentally changing my life.  Liz Lemon taught me that it was okay to be a geek and to love junk food and to look fab eating Cheesy Blasters, (even if she didn’t think so)  I was torn between two of my strongest nerd loyalties . . . and ultimately, decided on Rifftrax, because  it means I get to go to Bomber’s Burrito Bar afterwards.  See what I mean?  That’s Liz Lemon’s doing.

Because I’m going out, I faced a geek dilemma–do I dress to impress MST3K fans by sporting my slightly oversized red JOIKE sweater (styled after the one given to Mike by Gypsy in episode 521, Santa Claus), or do I dress to impress one/both of my dates by wearing something cute and nice?  Skirt or jeans?  Where do leggings fit into the picture?  The JOIKE sweater is wool and it’s cold outside, what does that count for?

I decided on the JOIKE sweater, a long fitted top underneath (like a bandage skirt) and Mossimo floral patterned leggings with Doc Martens.  Is it the most stylish, flattering, feminine outfit I own?  No.  But will it make my dates feel comfortable and at ease when we’re eating nachos at Bomber’s Burrito Bar afterwards?  Probably.  No one likes being overdressed and no one likes a high-maintenance girl.  The sweater is appropriate for the occasion and the weather, and might even earn me a few compliments from fellow Rifftrax geeks. 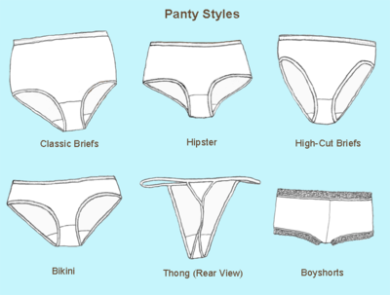 As a journalist, I’m trained to ask the hard questions, like “What are the hottest trends in wedding accessories?” or “What kind of country crafts will you sell at your new mall kiosk?”

So I pitched my Panel of Gentleman about their underwear preference on ladies, and the results were surprising.  Only one person, went for thongs, and that was after “extensive research.”

That’s right ladies.  You can go ahead and pry that string out from between the cheeks.

The majority of Gentlemen went for bikinis.  One singled out “the kind with those little ribbons on the sides that undo them.”  A few went for boy shorts, but overwhelmingly, bikinis won.

I’ll admit, I was surprised.  I always sort of figured underwear was one of those things men had ideas about that they never broached.  Like, “I wish my wife wore thongs, but all she wears are granny panties!”  But that so many came out in support of a simple, easy to find and wearable type of lingerie made me have hope that maybe, just maybe, you can be pretty and comfortable at the same time.  My boyfriend Ian summed it up thusly–“As long as they define the feminine shape and don’t look like you’ve packed two loaves of bread into your pants, they’re good.”

And thus, we conclude Panty Week.

Day 3 of Fancy Pants and I concede to the French belief that expensive cotton undies are worth it. It is. It 100% is. Maybe it’s not lacy nylon unmentionables, but you can’t feel sexy if you’re accidentally going half-commando because they’ve shifted and bunched in skinny jeans.

Today is mint-green, white polka dot and lace-trimmed bikinis.  These get the Liz Lemon seal of comfort approval!  Which is good, because I think I’m getting the flu, and I’ll need to be comfortable.

Wearing my new blue polka-dot thong.  New underwear is always nice, but this is especially comfortable, despite that it is a thong which is, by nature, kind of uncomfortable.  But this isn’t the worst, so okay, maybe I can start treating myself to slightly-more-expensive underwear.

I haven’t worn particularly fancy underwear since high school, when my ex-fiance, Aaron, used to buy me lots of lingerie from Victoria’s Secret, because he was kind of uncreative (if it wasn’t underwear, it was chocolate).  But when I got out on my own and had no money, it was cotton panties from the Jr. section of Wal-Mart, the kind that comes in the six-pack.  My underpants had to be comfortable, as I was standing for about 10 hours a day, so no thongs, no sexy v-strings, no lace or nylon.  But rest assured, I didn’t have a $200 dress either.

I took this challenge as a way to buy new fancy panties.  (That, and my favorite pair got a hole in them.)   But it’s been so long since I’ve had to buy any kind of lingerie that I wasn’t even sure what Ian liked.  Would he want me to wear bejeweled thongs?  Lacy boyshorts that go so high up into my personal area that they ought to buy me dinner?

So I asked him.  He thought it over and said. “I want them to be cute.  And fun.”  His reasoning being that we were cute and fun, and my lingerie should be uncomplicated.  Lacy underpants, to him, scream high maintenance.

Victoria’s Secret at the Sangertown Square Mall had a 5 for $26 sale, so I sifted through the bins.  The whole place smells of too much perfume and sadness.  The sales girls all wear too much makeup and too-tight skirts.  The other customers look like they’re going to hang themselves with the leopard-print V-string if they don’t pick up some guy named Brad at tonight’s 50 Shades of Grey themed party.

It should be noted that I hate Victoria’s Secret.  I’ve never had a good experience there, and today, dspite my best intentions, was no exception.  I picked out my five pairs–striped, polka dots, bikinis and even a thong–and took them to the register.  The sales girl tells me that two of my panties don’t qualify, even though they were in the bin.  Maybe this isn’t a big deal, but it’s annoying to have to go back, sift through more underwear and stand in line again.  She doesn’t even offer me a VS credit card.

But I came out with five pairs of high-end panties, which will hopefully transform me magically into a sex goddess.

“Add fragrance, packaged specifically for this purpose, to your douche.  Another good idea is to add a teaspoon of white kitchen vinegar to the douche twice a week”  Arlene Dahl, Always Ask a Man.

There are a lot of bad beauty tips out there that can actually hurt you, which is not pretty.  This is one of them.

I know two things about douching–1) “Douche” is French for soap, which always gets a giggle in French class and 2) When the word “bag” is attached, it becomes one of my favorite insults.

That’s about it as far as my knowledge of douching goes.   So before I tried this one out, I consulted Planned Parenthood, because as dedicated as I am to this project, I don’t have health insurance, so if I’m going to put vinegar near my personal lady parts, I want to make sure it’s not going to burn my uterus out.

“No,” was LNP Sherry’s answer the minute I said “douche” but before “vinegar” came into play.  “Not ever.”

.Apparently, douching washes away all the good bacteria that keeps everything . “The vagina is a self-cleaning oven,” she explained.  Also, I can’t imagine how that would smell good. So I took her advice and left the vinegar in the kitchen.