“Walk directly to the hat of your dreams and declare your love” Mr. John, The Charming Woman (Edited by Helen Fraser) (1950)

I have always loved hats, especially because they hide 30 years of hair I’ve never quite fully taken to liking.  I’ve had all sorts of hats–cabbie caps, Blossom brims, tiny pillboxes, enormous sunhats.

I started with berets in the sixth grade, because my sister Shaun wore them with her long green Eponine-esq Army trenchcoat (Shaun was so cool), and then Monica Lewinsky ruined the beret until I was in 10th grade, where I have several photos of me rockin’ a beret with my sophomore year Daria uniform of a sweater, pleated skirt, patterned tights and combat boots (even though personality wise, I’m more Jane).

I do own a raspberry beret and yes, I got it in a second-hand store.  I want a leopard-skin pillbox hat too, just to continue my musical nerd-dom.

I started this week’s stunt with my black pillbox, complete with jeweled hatpin.  My hair was misbehaving today, which actually made hat wearing more difficult.  See, I have this thing with my ears–I don’t like stuff touching the tops/backs of them.  Glasses are torture enough (especially when they get loose, which they do surprisingly often), but I don’t like anything that could make them stick out any further than they already do. 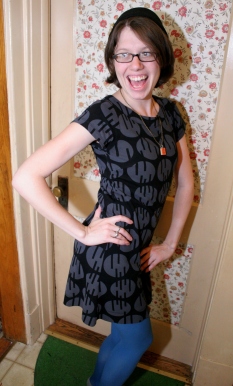 The hat, combined with the limpness of my terrible hair, kept pushing out my ears, and I had to keep adjusting the whole thing, which almost ended up being more trouble than it’s worth.  It’s a very cute hat and I liked the little “bump” it gave me in the back, but even now, it’s still not one that I wear very often.