“If you really like men but would like to seem a little softer and less self-sufficient, go on a “helpless campaign.”  Let a man push open every door…have difficulty with your packages. He’ll help carry.” Helen Gurley Brown, Sex and the Single Girl. 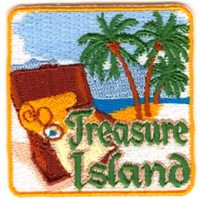 I got a badge for looting!

Self-sufficiency is kind of something that I do.  I was a member of Girl Scout Troop 23 when I was a kid, and we were a rough-and-tumble, no nonsense kind of troop.  Once, we met with another troop who’s idea of camping was throwing down sleeping bags in their troop master’s living room and making s’mores in the microwave.  We all had a good laugh, because for us, outhouses were considered fancy-camping.  We used a “dripilator”–a gallon milk jug filled with water and plugged with a stick–to wash our hands.  Mrs. C had one-pot goulash down to such a science she could do it with her eyes closed over an open campfire.  We were pretty badass little girls.

But the other day, I had a helpless attack, and luckily, I had a good man around to rush to my rescue.

I spent the weekend in the city with my BFF/writing partner Matthew; we went to Greg Sestero’s book launch for The Disaster Artist and saw Steely Dan play Gaucho at the Beacon.  Both were awesome.  But when it came time for me to catch my train back upstate, he dropped me off at the curb (there was no parking) about two blocks too early.  I hurried along, arms aching from hauling my heavy vintage suitcase, and no one could tell me how the heck I was supposed to get to Penn Station.  I was going to miss my train.

I could have bucked up and figured it out on my own, but something inside me just couldn’t.  I started to cry.  I was tired and sore and frustrated.  I called Matthew sobbing, begging him to come back and get me.

I found my way to the ticket line a full ten minutes after my train left and as I stood there, trying not to faint and he appeared like magic.  He’d parked the car in an overpriced lot and come running when I called.  That’s the mark of a friend.  He hugged me until I could breathe a little slower and helped me get a new ticket and sat with me until my heart rate came down.

The strange thing was, I was floored by his generosity.  These days we have such an independent spirit, even so much as allowing our leaders to deny other people food, shelter and a healthy life because of the “I worked for mine, why should you get yours free?” mentality.  This, “you packed the suitcase, you carry it” is a pretty ugly little space to occupy.  I didn’t expect him to come back and was even prepared to be angry at him for not being at my beck and call.  What an awful way to think of a friend!

It’s no sin to ask for help.  No one likes a wilting flower, but even Tina Fey says that if you are mad enough to cry, turn on the waterworks.  Show your vulnerability, and people will respond.  And in turn, you will help out when you see someone in need.  It’s pretty easy, but it takes practice.  So go out there and give it a try, on both sides.  Help and be helped.  It’s nice when you get used to it.

(But getting a rolling suitcase probably wouldn’t be a bad idea either.)