“The essence of great hairdressing is a clearly stated, perfectly proportioned haircut.  One that is suited to the individual that with a little backcombing or setting, the hair will swing into it’s natural lines and keep those lines without artificial aid” Arlene Dahl, Always Ask a Man.

I remember my mom having two hairstyles.  In early photos, just after we moved to Cobleskill, NY in 1984, she’s sporting an enormous poodle perm.  In later photos and up through today, her hair is very, very short.

My mother had a total of five kids, a full time job and, during part of that, was going to school full time.  She wanted “hair she could wash with a washrag” and sported a sort of k.d. Lang ‘do.  The most she ever did with it was let her friend Vicky frost the tips, (because it was the 90’s, and they were dark times) and ended up with green hair.

The Pirate Ship Would Have Been Nice Too

My sister Shaun had long, beautiful dark hair which fell in waves and curls down her back, like Geena Davis in Cutthroat Island, my favorite movie at the time.  Sisters Hilary and Laura both had fine golden curls, wheras I had limp hair the color of wood paneling.

I never learned how to style my hair and was always a little afraid of it.  I, like most kids in the dark times of the 1990’s, sported some variation of a mullet at one time (mine was very Joan Jett-esq, for an eight year old) and therefor, just sort of let my hair do it’s thing.

After my high school graduation, I cut off ten inches of hair and donated it to Locks for Love, but, in true geek fashion, got my hair cut like Faye Valentine (I brought in the action figure so they would know what to do.)  My hair was not purple, or straight, and I was not a space bounty hunter, so it didn’t quite work for me.

In college, I wore Bettie Page bangs, which, when fused with my being poor and not knowing what to ask for in a haircut, resulted in me often having little brown wings sporting off the sides of my face.  I grew them out eventually, and kept that long mess for years, finally cutting it all off after my stepdad left in some sort of expression of Girl Power/I Will Survive.

I never did anything with my hair because I was so, so terrified of getting a bad haircut.  A failed outfit can be stuck back in the closet or covered with a coat all day, but you’re stuck with your hair until it grows out.  I was not brave.  If I got a bad haircut, I was convinced that people would laugh at me in the streets, that I would never get a boyfriend/my boyfriend would leave me for my disobedience.   Even before this project began, I had this pathological need to make other people happy.

Worse, how the hell was I going to maintain a fancy haircut?  I was watering down my shampoo to make it last longer, how was I going to afford gel and a straightening iron and things of that nature?  And the time it might take?  Between three jobs, that wasn’t time I had to spare.

So my hair just sort of sat there.  Until now. 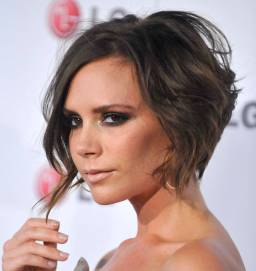 Pictured: Someone who is not me

My modern glam idol is Victoria Beckham.  I think she balances sophistication and utter fabulousness, whether she’s wearing jeans or a cocktail dress.  I flipped through the magazines until I found a cute, tousled look that I figured I could pull off, what with hating to do my hair and not having time and being totally clumsy in every way.

Ian was very nice about the whole thing.  Mike said I looked like Paul Dano, but in his mind, that was a compliment.  Everyone at my church and in my office ooh’d and ahh’d over it.  Tara, the head of ad sales, said I looked “very sophisticated” and complimented me for two straight days.   And as I got used to it, played with it, figured it out, I realized that maybe it wasn’t as bad as all that.  With the right outfit, it had a little bit of an punk vibe to it.  I was going to have to dress a little more feminine to avoid looking like an urchin, but was that going to be a bad thing?

Will I get it again?  Probably not.  But did the world end because of one bad haircut?  Guess it wasn’t so bad after all…after all, I didn’t keep any photographic evidence of my Joan Jett mullet.